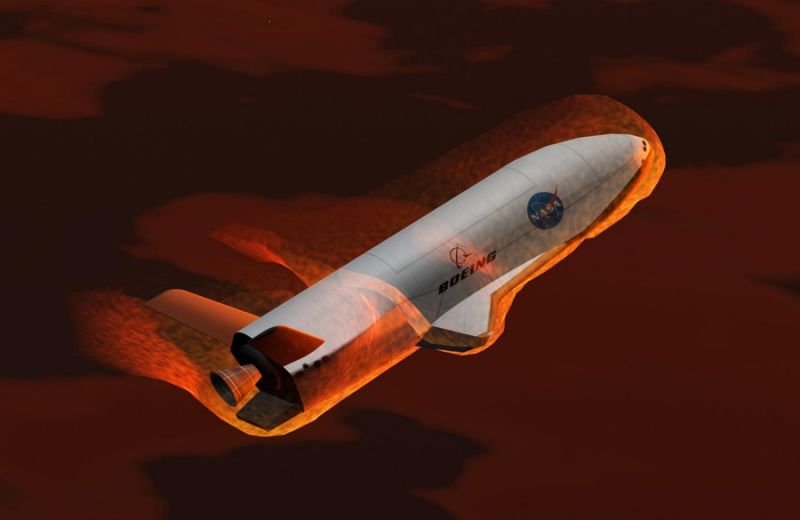 Boeing built at least two X-37Bs for the Air Force in the mid-2000s reportedly at a cost of around a billion dollars apiece. While it looks like a miniature version of NASA’s Space Shuttle, which retired from service in 2011, the X-37B essentially is a small, reusable and maneuverable satellite with a shorter per-mission endurance compared to single-use satellites.

The fifth and latest X-37B mission could send the mini-shuttle over large portions of Russian territory for the first time.

“We can recognize a bit of the nose, payload bay and tail of this mini-shuttle, with even a sign of some smaller detail,” Vandebergh told Space.com.

Vandebergh had been hunting for the robotic spacecraft for months and finally managed to track it down in May 2019, according to Space.com reporter Leonard David. But it took a few more weeks to actually photograph the roughly 29-feet-long robotic shuttle.

“When I tried to observe it again [in] mid-June, it didn’t meet the predicted time and path,” Vandebergh told David. “It turned out to have maneuvered to another orbit. Thanks to the amateur satellite observers’ network, it was rapidly found in orbit again, and I was able to take some images on June 30 and July 2, [2019].”

Boeing built at least two X-37Bs for the Air Force in the mid-2000s reportedly at a cost of around a billion dollars apiece. While it looks like a miniature version of NASA’s Space Shuttle, which retired from service in 2011, the X-37B essentially is a small, reusable and maneuverable satellite with a shorter per-mission endurance compared to single-use satellites.

The Air Force describes the X-37B as an “orbital test vehicle,” or OTV.

(This first appeared earlier in the month.)

The X-37B blasted off for its first mission on a United Launch Alliance Atlas rocket in April 2010. Where many satellites can function for up to a decade in orbit, the X-37B’s longest mission as of early 2018 was its fourth, beginning in May 2015. It lasted 717 days.

The X-37B that Vandebergh photographed launched atop a SpaceX Falcon rocket in September 2017. Each X-37B mission reportedly costs around $200 million.

According to the Air Force, the spreader will help to “test experimental electronics and oscillating heat pipe technologies in the long-duration space environment.” The X-37B itself, with its longer and longer missions, is driving demand in the United States for spacecraft components that can survive for years at a time in orbit.

“The fifth OTV mission continues to advance the X-37B’s performance and flexibility as a space technology demonstrator and host platform for experimental payloads,” the Air Force stated.

As the Air Force continues to refine the X-37B’s operations, it’s possible the current mission could set a new record for the type. “It sips power and fuel like a Prius,” in the words of one government space insider who spoke on the condition of anonymity.

In the past, the Air Force was cagey about exactly which payloads the X-37B carried into orbit—and that encouraged wide-ranging speculation by space experts. “You can put sensors in there, satellites in there,” Eric Sterner, from the George C. Marshall Institute in Virginia, said of the X-37B. “You could stick munitions in there, provided they exist.”

The Air Force denies that the X-37B has ever carried weapons. Overtly arming a spacecraft would be a violation of the 1967 Outer Space Treaty.

In pushing for a separate military branch for space operations and promising a new generation of orbital systems including missile-defenses, the administration of U.S. president Donald Trump could begin to challenge the decades-old ban on space-based weaponry.

But it would be perfectly legal, and unsurprising, for the X-37B to function as a kind of reusable spy satellite—and it could do so without necessarily jeopardizing its other, scientific missions.

Indeed, the Air Force acknowledged that testing the heat-spreader isn’t the X-37B’s only current task. The reusable spacecraft is also pioneering new orbital pathways for the type.

“The fifth OTV mission will also be launched into, and landed from, a higher inclination orbit than prior missions to further expand the X-37B’s orbital envelope,” the Air Force explained.

A spacecraft’s orbital inclination is equal to the highest north-south latitude it passes over. The X-37B previously flew between 37 and 43 degrees, according to Brian Weeden, a space expert with the Secure World Foundation in Colorado.

Extending the X-37B’s inclination expands “what it can collect information on, assuming that’s its mission,” Weeden told The Daily Beast. It’s worth noting that almost all of Russia lies north of the X-37B’s previous inclination range.

The fifth and latest X-37B mission could send the mini-shuttle over large portions of Russian territory for the first time.

David Axe serves as Defense Editor of the National Interest. He is the author of the graphic novels  War Fix, War Is Boring and Machete Squad.