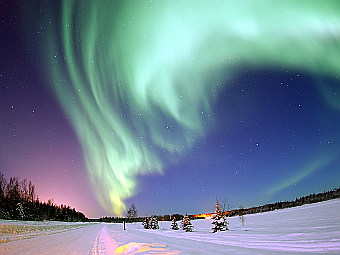 “Previous artificial plasma density clouds have lifetimes of only ten minutes or less,” said Paul Bernhardt, Ph.D., NRL Space Use and Plasma Section. “This higher density plasma ‘ball’ was sustained over one hour by the HAARP transmissions and was extinguished only after termination of the HAARP radio beam.”

Sequence of images of the glow plasma discharge produced with transmissions at the third electron gyro harmonic using the HAARP HF transmitter, Gakona, Alaska. The third harmonic artificial glow plasma clouds were obtained with HAARP using transmissions at 4.34 megahertz (MHz). The resonant frequency yielded green line (557.7 nanometer emission) with HF on November 12, 2012, between the times of 02:26:15 to 02:26:45 GMT.

These glow discharges in the upper atmosphere were generated as a part of the Defense Advanced Research Projects Agency (DARPA) sponsored Basic Research on Ionospheric Characteristics and Effects (BRIOCHE) campaign to explore ionospheric phenomena and its impact on communications and space weather.

Using the 3.6-megawatt high-frequency (HF) HAARP transmitter, the plasma clouds, or balls of plasma, are being studied for use as artificial mirrors at altitudes 50 kilometers below the natural ionosphere and are to be used for reflection of HF radar and communications signals.

Past attempts to produce electron density enhancements have yielded densities of 4 x 105 electrons per cubic centimeter (cm3) using HF radio transmissions near the second, third, and fourth harmonics of the electron cyclotron frequency. This frequency near 1.44 MHz is the rate that electrons gyrate around the Earth’s magnetic field.

Optical images of the artificial plasma balls show that they are turbulent with dynamically changing density structures. Electrostatic waves generated by the HAARP radio transmissions are thought to be responsible for accelerating electrons to high enough energy to produce the glow discharge in the neutral atmosphere approaching altitudes of nearly 170 kilometers.

The NRL team is working with collaborators at SRI International, University of Alaska Fairbanks, University of Florida, and BAE Systems on this project to synthesize the observations with parametric interactions theory to develop a comprehensive theory of the plasma cloud generation. The next HAARP campaign, scheduled for early 2013, will include experiments to develop denser, more stable ionization clouds.